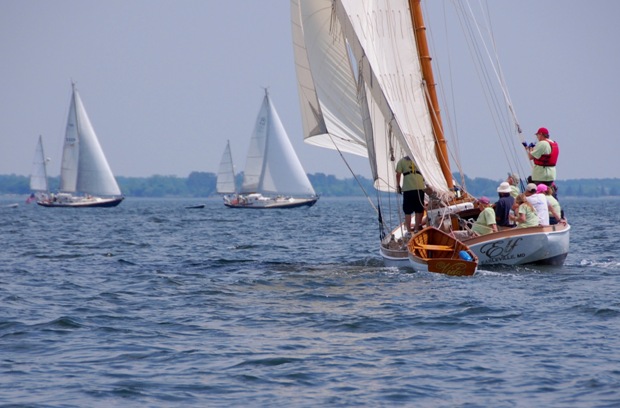 The Elf Classic Yacht Race Saturday, Sept.18, 2021, with an 11:00 a.m. start from the Chesapeake Bay Maritime Museum, and takes place exclusively on the Miles River, offering spectators at CBMM an unparalleled view of some of the most beautiful, classic sailing yachts.

The September race features a 19th century traditional yacht racing start, beginning with a captains’ meeting on land, followed by the boom of a cannon, signifying each captain’s mad dash to a tied-up dinghy, or tender. Next, the captains row out to their moored vessels and waiting crews, before tying up their tenders and raising anchor, with up to 30 yachts racing on the Miles River under a cloud of sail.

Race participants will first be greeted along CBMM’s Fogg’s Cove and the winners announced at a trophy reception later in the day. Entrance to watch the race is included with CBMM’s regular two-day admission.

Organized by CYRG, the race features America’s oldest active racing yacht, the 1888 Elf. Restored to historically accurate condition and re-launched in 2008, Elf is a Lawley-built 30-foot class cutter. Elf pioneered offshore yacht cruising in 1893 by being the first small craft to race the round-trip from Marblehead, Mass. to Halifax, N.S.

For race registration information, visit cyrg.org or contact CYRG’s Rick Carrion at cyrg.elf@gmail.com or 443-566-2212. CYRG is a non-profit, member organization dedicated to the preservation of maritime heritage through the maintenance and operation of Elf. The yacht was designed by George Lawley & Sons of South Boston, Mass., and built in 1888 for William H. Wilkinson. Over the warmer months, Elf can be seen dockside at CBMM, and under sail along the Miles River and Chesapeake Bay.