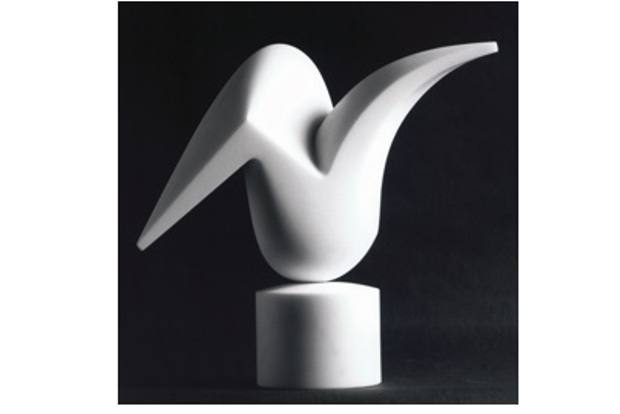 Shelley Robzen, originally from Pennsylvania, studied Fine Arts at Syracuse University, where she received a B.F.A. in sculpture.  Since graduating in 1974, she moved to Pietrasanta, Italy, an international center for sculptors who work in marble and bronze.  She recalls the amazing scene she witnessed on the first day she arrived in Pietrasanta: a couple of white oxen pulling a great wooden cart on top of which was strapped a full-scale copy of Michelangelo’s Pieta.

She came to Pietrasanta determined to learn everything she could about marble.  She says: “There was a magical atmosphere in Pietrasanta at the time (1974) where you could actually feel sculpture in the air.  Everything that supported sculpture was there – marble, marble studios, foundries, master artisans, mold makers, craters and tool shops.  Immediately, I felt at home.”  Robzen’s sculpture is amazing in its purity and its celebration of beauty and craftsmanship.  She has a perfect sense of form, volume and line.  Her sculptures are sensual and sensitive.  They are pared down to an essential simplicity as her artist statement reads: “Simplicity of line seeking the purity of form is the essence of my sculpture.”

Robzen was invited to become a member of the Royal British Society of Sculptors in 2004.  This was an honor she received when the Society amended their constitution allowing prominent international sculptors full membership.