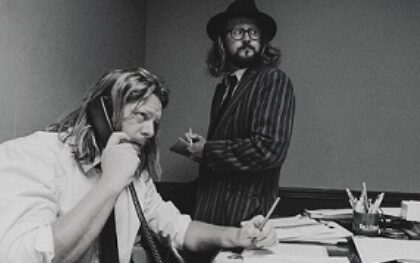 “Smart lyrics and great musicianship. Journos plays the role of court jester: Clever and chaotic rabble-rousers whose job is to remind the monarchy of its mortality.” PopRiot Music

A scathing editorial, Journos’ debut full-length album “In the Key of WTF” is a sonic statement that neither buries the lead nor misses the point. Russo’s lyrics recall the snark of Elvis Costello and dry humor of Randy Newman, while Abbott’s hooks relentlessly propel this hard-driving quintessential record.

“In the Key of WTF” is a palate cleanser for an audience saturated with the static of televised news commentary, but it also does the trick turned up with your car windows down on a hot August night.